We Were Promised Jetpacks … 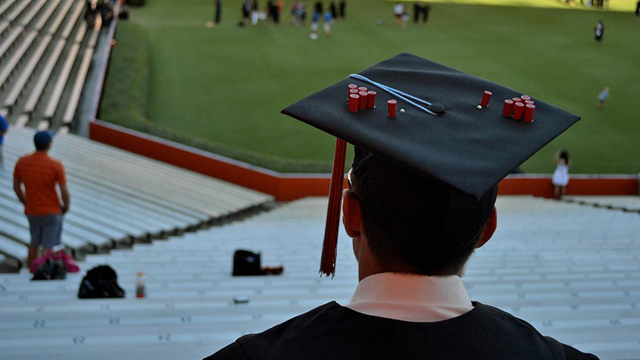 If you graduated from college between 2006 and today, you’re part of a generation dealing with a new normal. With freshly pressed college degrees in hand, we walked optimistically into the great recession. It was/is hard.  Today our cherished college degrees aren’t getting us the jobs we want, to pay for the houses we can’t afford .. blah blah blah. But here’s the thing, this is all we know.

Many economists are calling this “The Lost Decade.” And for many, this is not what we signed up for. But we are resilient. In fact, we’ve learned some positive lessons:

We went to college because a) college is fun but more likely because b) a college degree was a means to an end, that end being a job. That was the deal. But that deal is off now.

When we went to school, we were kept there with a story, which is if you worked hard and did well, and got a college degree, you would have a job. Our kids don’t believe that, and they’re right not to by the way. You’re better having a degree than not, but its not a guarantee anymore. And particularly not if the route to it marginalizes most of the things you think are important about yourself. – Sir Ken Robinson

So while having a degree is important, it’s not the only way to get a job. There are countless resources that arm motivated people with all they need to position themselves for success. Kickstarter went ahead and made entrepreneurs out of anyone with an internet connect. In fact, why waste four years in college when you could start immediately building your business out of high school? Don’t want to be an entrepreneur? Find an entry level job, take free classes on Kahn Academy, and work your way up. You’ll have four years in by the time others graduate from college (and you’ll have no student loan debt).

2. Find a Job You Love (And Never Retire…Ever)

We watched out parents’ 401ks tank and our grand parents put off retirement. We know this because we were likely unemployed and living at our parents’ houses when this happened. It’s become clear to us that 401ks may not hold their promise of value and that social security may not be there for us when we retire.  Our generation isn’t convinced we’ll have a retirement, and oddly, this is a positive thing. If you’re not counting on retirement, you have less to work towards (financially). Once you let the idea of retirement go, you realize it’s important to find a job you love, because you’ll be in it for the long run.

3. The American Dream House (For Rent)

Who wants a white picket fence anyway? We all did. It seemed to be the natural progression of things. But we’re now a nation of renters. We refuse to rationalize paying mortgage interest, insurance, taxes and general upkeep on a house after we watched the market tank in front of eager faces. We’re skeptical. Maybe someday we’ll come around, but not anytime soon.

Conclusion: We Are Tough Mofos

No job? No problem, we’ll bootstrap together any part-time / freelance / volunteer / intern / table-waiting work we can find while sending out 30 resumes a day.

Parents laid off? We’ll improvise and move back home and split the mortgage.

401k tank? Who needs it? We love our jobs and we’re not retiring.

Can’t afford the down payment on your dream home? No worries, we’ll be renting anyway.

Things are hard, but this is our normal. We are resilient. Give a millennial WiFi and some inspiration pointed in the right direction and we’ll make our own jobs. We could be jaded about this, but actually, we’re empowered. Things are not what they were before, but that’s ok, we’re making our own jetpacks.